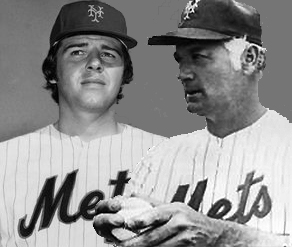 Somewhere, where time has no meaning, and a thousand games are as a single inning, Bill Monboquette is teaching Charlie Williams the proper grip on a two-seamer.

In recent weeks, in which I’ve resolved to get back on this blog and review the final legacies left behind by deceased Mets personnel, the idea still remained to honor these fallen soldiers in the order in which they fell.

But it would be wrong not to take a moment to acknowledge the passing in recent weeks of two Met figures who had distinctive if not large places in history.

Bill Monbouquette had the strange fortune of being the special sauce of a pitching coach spread between the two all-beef patties that were Rube Walker and Mel Stottlemyre, the two highest-profile pitching coaches in Mets history with the most successful staffs. I’ll leave somebody wiser to me to judge whether they were better or just more fortunate. But Bill, under managers George Bamberger and Frank Howard, brought along Jesse Orosco, Doug Sisk, and Ed Lynch. Mike Scott failed to come along during his tenure, and Neil Allen fell into the strange malaise that led to his eventual trade for Keith Hernandez. So… yay?